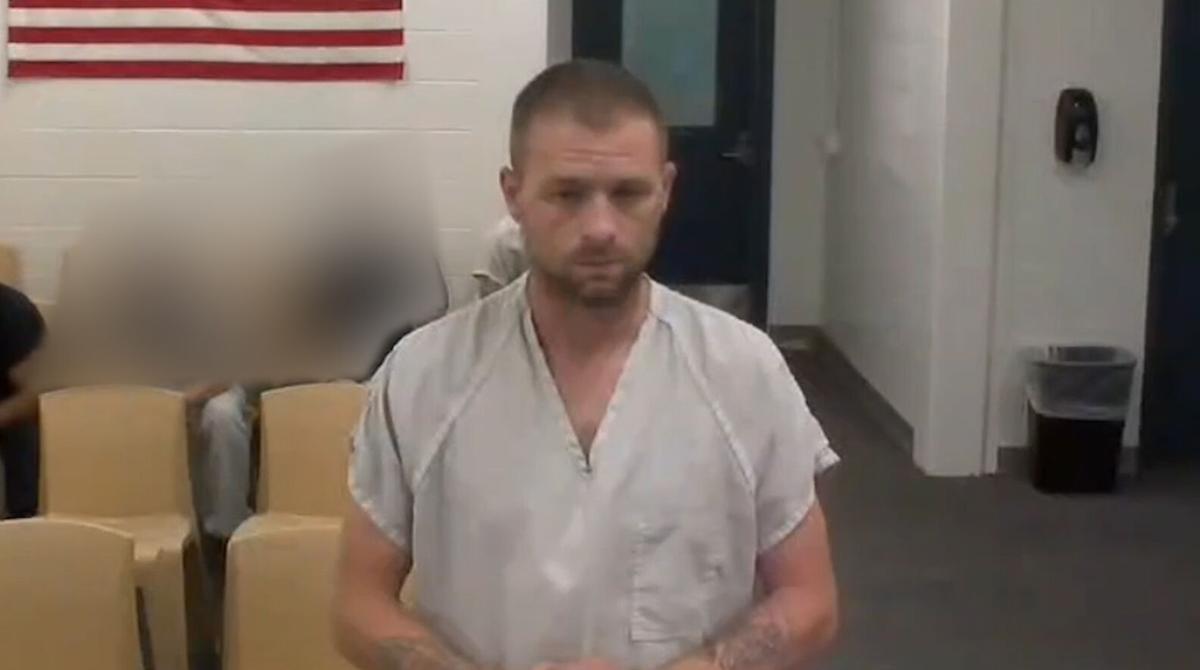 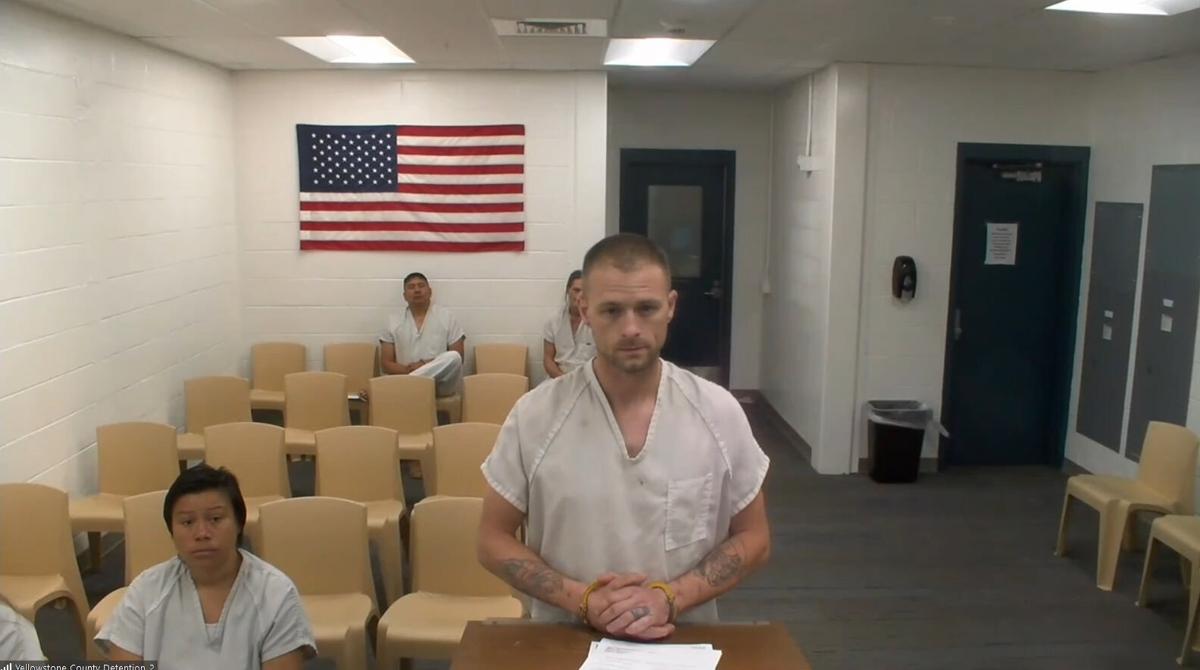 Sean Robinson is arraigned on aggravated animal cruelty charges during video from the Yellowstone County Detention Facility. May 4, 2021 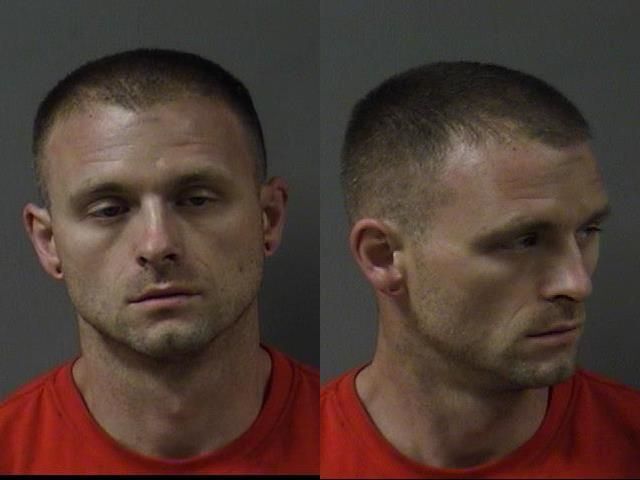 Sean Robinson is arraigned on aggravated animal cruelty charges during video from the Yellowstone County Detention Facility. May 4, 2021

Robinson is accused of stealing, strangling and decapitating cats in or around the area of the 1700 block of Duval Drive.

He was arranged Friday on amended charges stemming from a search of his truck.

Documents state a Yellowstone County Sheriff’s Office Detective and animal control officer found cat treats, cat nip in the truck as well as blood on several parts of the truck.

A pair of branch cutters that appeared to have dried blood and cat hair on them were located also in the truck along with a partial tow strap related to one of the animal abuse incidents.

Robinson appeared in Yellowstone County District Court via video for an arraignment on two felony counts of aggravated animal cruelty and a misdemeanor theft charge.

Rosenquist informed Judge Ashley Harada that a search warrant of Robinson's vehicle resulted in police recovering the bodies of one or two cats and the body parts of others.

Rosenquist stated that Robinson would strangle and at times decapitate cats.

Judge Harada set bond at at $100,000 and ordered Robinson be monitored using a GPS ankle bracelet. Robinson is also ordered to have no contact with any animal, including his own dog.

Harada stated to Robinson, "These are serious cases, sir. And, the information you've been providing over the jail telephone only exacerbates the situation if you are actually saying that you had to do this instead of hurting humans. I am very concerned."

If convicted, Robinson would serve a maximum of two-years in jail and a fine not to exceed $2,500 dollars.

BILLINGS, Mont. - Court documents for an investigation into a man accused of animal cruelty state he admitted he, “has a thing for killing cats.”

Around April 2021, a Yellowstone County Sheriff’s Office animal control officer was made aware of cats disappearing either after being given to Sean Robinson or from the neighborhood surrounding his residence on the 1700 block of Duval Drive in Laurel.

Court documents say an animal control officer initiated an investigation and gathered names and information regarding missing cats and suspected animal cruelty by Robinson against cats and dogs.

People who had personal knowledge of Robinson gave several instances where they were aware of Robinson beating and/or killing cats and dogs.

One of those people included a man who lives on Duval Dr.

On May 18, the officer spoke to the man who stated he and his wife moved there in March, and that on May 16 around 7 p.m. he was working in his garage when Robinson walked in and introduced himself.

Robinson reportedly told the man he lived up the road and that his wife’s cat had gotten out and that he thought it might have run into the man’s garage.

The man gave Robinson permission to look for the cat around the house, and a few minutes later the man’s wife came into the garage, asking if Robinson had found the cat. She added that she watched Robinson act in a scary and strange manner behind their house.

The man also told the officer that on May 17, two neighbors came to their house looking for their pet cat, telling him the cat went missing out of their yard the evening before.

When the officer spoke to the neighbors, she interviewed another man who said that on May 16, he and his family were playing in the front yard from around 1 to 7 p.m. They said their pet cat, Hobo, was in their yard with them. The man told the officer that the cat only really went outside when the family was outside.

At around 7 p.m., when the family went inside, Hobo was seen sitting by the ditch outside.

When the family finished eating around 7:30 p.m., the man said he went outside and could not find Hobo.

The man said that when Hobo did not show up again by the next morning, they became concerned and began asking their neighbors if they had seen the cat.

That point is when the man said his neighbor told him he shared an interaction with Robinson the night before.

The man then reportedly confronted Robinson about having his cat, saying that Robinson responded, noting that he saw the family out playing the night before, but that he got angry and left after talking further.

He also told the officer he saw Robinson driving around in circles around the neighborhood and rustling around under the porch of a house at the corner of Gold Course Road and Payne’s Place earlier on the day Hobo went missing.

A deputy with the county sheriff’s office was reportedly called out but did not find anything.

Also on May 18, the officer spoke to another woman who said that on the May 16 around 7 p.m. a man went up to her husband and said his name was Sean and that he was looking for his cat.

The woman said she did not think anything about the interaction and went back inside her home.

A short time later the woman said that her dogs were barking in the backyard and that, as they went to the back door to let them in, she saw Robinson walking between her fence and a neighbor’s yard toward an irrigation ditch.

Documents say the woman reported Robinson looked determined and focused, but that he did not look like he was looking for a cat.

The woman said she saw Robinson quickly walk to a spot along the easement of the irrigation ditch and stood there for a few seconds.

Robinson then reportedly fell to his knees in the tall grass with his hands appearing to have been holding something in front of his chest while moving his arms around. The woman said she could not see what Robinson was holding.

After that, the woman said Robinson moved his arms back and forth violently for a minute or so and then became still while bearing his weight onto the ground while his hands were in front of his chest for three to five minutes.

Robinson then stood up quickly, bushing his shirt off and quickly walked back toward the front of the houses.

When the woman went out to ask if he had found the cat, Robinson was out of sight by the time she got to her garage. The woman added that she felt she saw something violent and something was not right.

The officer was shown the spot next to the irrigation ditch where the woman saw Robinson, acting strange and observed the spot where the grass was broken down. The woman pointed out what appeared to be tufts of animal fur throughout the bent-over grass.

Photos were taken of the area before concluding the interview with the woman.

Documents also say that on May 31, a Laurel Police Officer responded to a home on 9th Ave. for a report of a man stealing a cat.

Upon arrival, the officer spoke with a woman who said she had not seen her cat in a couple of days and that, after reviewing security camera footage, they found a man taking their cat on May 30 around 8:30 p.m.

Documents say the officer reviewed the footage and saw a small, dark colored, old-styled, two-door pickup pull up two houses down and a man in a red shirt got out.

The man reportedly approached the house and coxed the cat over to him and pet it before grabbing it. As the man grabbed the cat it squealed in pain before the man carried it to his pickup and left.

On June 1 around 4 a.m., the Eastern Montana High Intensity Drug Trafficking (EMHIDTA) task force executed a “no knock” search warrant on Robinson’s house in relation to an unrelated investigation.

As the task force was preparing to execute the warrant, Robinson was reportedly seen driving away from his house in a truck matching the description of the truck in the surveillance video.

An officer contacted Robinson driving the truck at an on-ramp for I-90 and saw he was wearing the same clothing as the man in the surveillance video.

Robinson was put under arrest for the theft of the cat and a detective with the Laurel Police Department transported Robinson back to his house where the search warrant was being executed.

During a visual inspection of the truck, the officer reportedly saw burnt and crumpled up tin foil which documents say is often used to contain and ingest illegal drugs.

Drug paraphernalia was also found in Robinson’s house during the execution of the search warrant according to court documents.

A K9 was deployed and exhibited alert behavior consistent with the odor of illegal drugs along the driver’s side door’s open window and door seam.

The officer informed the task force of the K9’s indication and requested the truck be seized and towed to the Billings Police Department impound lot.

At his house, Robinson was advised of his Miranda Rights and agreed to speak with a detective regarding drug activity.

During the interview, Robinson reportedly told the detective that he, “has a thing for killing cats.”

After his interview, Robinson was transported to the Laurel Police Department where he was advised again of his Miranda rights and agreed to speak with law enforcement.

Sean Robert Robinson has been charged with two counts of aggravated animal cruelty and theft, third or subsequent offense.