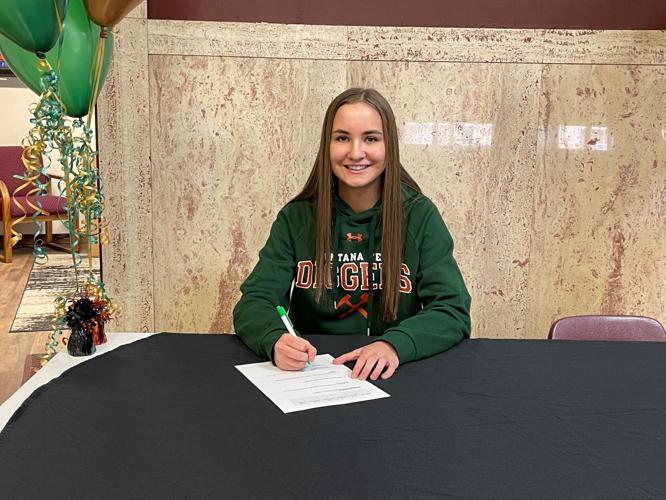 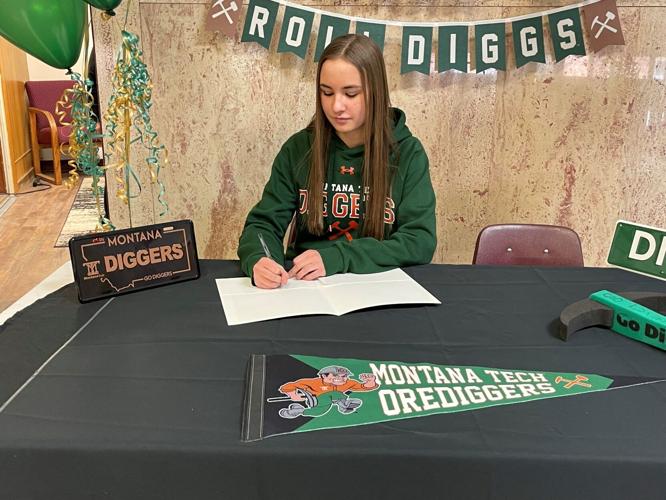 BUTTE – There is nothing like the feeling of playing at home.

Butte Central forward Brooke Badovinac understands as much as any student-athlete the meaning of playing at home.

“I had offers from Carroll College, Montana Western, Montana Northern, and MSU-Billings,” Badovinac said. “It came down to Tech because it’s home. There is nothing like being at home. It feels great for it to finally be decided.”

“Today is a celebration, not only for Brooke, but for Butte high school basketball as well,” Graham told the attendees of the ceremony. “We were lucky to have Mollie (Peoples) and Hattie (Thatcher), but we are so glad Brooke signed with us. We lucked out a ton!”

It was a great start to Butte Central head coach Quinn Carter’s first season at the helm of Maroons girls’ basketball. Carter was an assistant that learned from longtime Butte Central and Montana Tech head coach Meg Murphy.

“Brooke has been not only a big part of the Maroons’ athletic program, she is an incredible asset to Butte Central,” Carter said. “We get four more years of Brooke in our community.”

Badovinac is coming off a solid season in which she collected Southwest “A” Honorable Mention for Becky Hancock’s Maroon volleyball team, and is fired up about the 2022-2023 season ahead.

“I’m really excited for this basketball season,” Badovinac said. “With it being my senior year and playing alongside my friends. We have a number of new kids coming in and it will be a learning year. With Coach Quinn as the new coach, I’m excited for her. Together, I believe that we can build something great. I truly believe in her coaching abilities. I think it is going to be a great year.”

Graham beamed from ear-to-ear when asked about what Badovinac brings to the court.

“She’s a great kid, and a selfless scorer,” Graham said. “We’re all about doing our best in keeping the local kids here, especially if they’re family is Tech. If get a scorer that is unselfish, that is a bonus.”

“I believe in what Coach Graham is doing,” Badovinac said. “He is building something great over at Tech.”

Carter will have Badovinac as one of the senior leaders in her program, which will be a key with having a young team. Mehring and Maycee Anderson, both multi-sport athletes as well, will be relied upon for leadership.

“With tip-off next weekend, it will be a big start,” Carter said. “We’re excited to get this season going.”

Badovinac gave a ton of thanks to her family, teammates, friends, and coaches that guided her along the path of her sports career.

“I want to thank Coach Meg Murphy for my first three years, and Quinn for coming in this year,” Badovinac said. “I wouldn’t be here without the coaches and plays on my team that have been unbelievable in pushing me every day to be the basketball player that I want to be. I’m really thankful for everyone who has been part of this.”

Pickleball is booming in Billings, and it's easy to see why

Binford Credits Historic Win to Her Bobcats' Belief in the Program