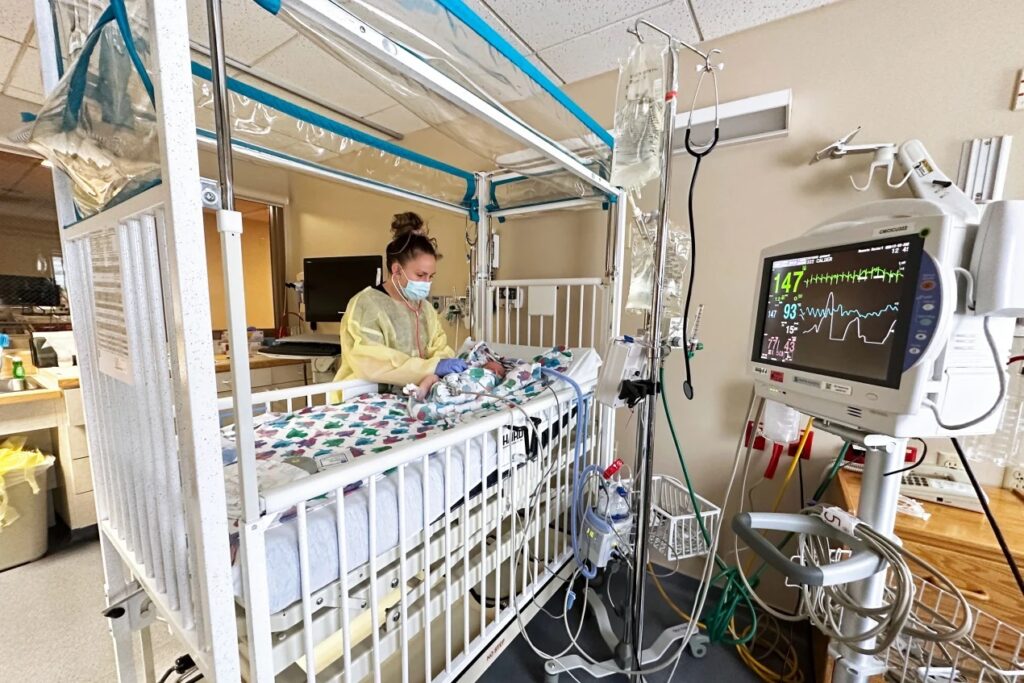 The dire shortage of pediatric hospital beds plaguing the nation this fall is a byproduct of financial decisions made by hospitals during the past decade, as they shuttered children’s wards, which often operate in the red, and expanded the number of beds available for more profitable endeavors like joint replacements and cancer care.

A major factor in the bed shortage is a years-long trend among hospitals of eliminating pediatric units, which tend to be less profitable than adult units, said Mark Wietecha, CEO of the Children’s Hospital Association. Hospitals optimize revenue by striving to keep their beds 100% full — and filled with patients whose conditions command generous insurance reimbursements.

“It really has to do with dollars,” said Dr. Scott Krugman, vice chairman of pediatrics at the Herman and Walter Samuelson Children’s Hospital at Sinai in Baltimore. “Hospitals rely on high-volume, high-reimbursement procedures from good payers to make money. There’s no incentive for hospitals to provide money-losing services.”

The number of pediatric inpatient units in hospitals fell 19% from 2008 to 2018, according to a study published in 2021 in the journal Pediatrics. Just this year, hospitals have closed pediatric units in Boston and Springfield, Massachusetts; Richmond, Virginia; and Tulsa, Oklahoma.

The current surge in dangerous respiratory illnesses among children is yet another example of how COVID-19 has upended the health care system. The lockdowns and isolation that marked the first years of the pandemic left kids largely unexposed — and still vulnerable — to viruses other than COVID for two winters, and doctors are now essentially treating multiple years’ worth of respiratory ailments.

The pandemic also accelerated changes in the health care industry that have left many communities with fewer hospital beds available for children who are acutely ill, along with fewer doctors and nurses to care for them.

When intensive care units were flooded with older COVID patients in 2020, some hospitals began using children’s beds to treat adults. Many of those pediatric beds haven’t been restored, said Dr. Daniel Rauch, chairman of the American Academy of Pediatrics’ committee on hospital care.

In addition, the relentless pace of the pandemic has spurred more than 230,000 health care providers — including doctors, nurses, and physician assistants — to quit. Before the pandemic, about 10% of nurses left their jobs every year; the rate has risen to about 20%, Wietecha said. He estimates that pediatric hospitals are unable to maintain as many as 10% of their beds because of staffing shortages.

“There is just not enough space for all the kids who need beds,” said Dr. Megan Ranney, who works in several emergency departments in Providence, Rhode Island, including Hasbro Children’s Hospital. The number of children seeking emergency care in recent weeks was 25% higher than the hospital’s previous record.

“We have doctors who are cleaning beds so we can get children into them faster,” said Ranney, a deputy dean at Brown University’s School of Public Health.

There’s not great money in treating kids. About 40% of U.S. children are covered by Medicaid, a joint federal-state program for low-income patients and people with disabilities. Base Medicaid rates are typically more than 20% below those paid by Medicare, the government insurance program for older adults, and are even lower when compared with private insurance. While specialty care for a range of common adult procedures, from knee and hip replacements to heart surgeries and cancer treatments, generates major profits for medical centers, hospitals complain they typically lose money on inpatient pediatric care.

Even before the autumn’s viral trifecta, pediatric units were straining to absorb rising numbers of young people in acute mental distress. Stories abound of children in mental crises being marooned for weeks in emergency departments while awaiting transfer to a pediatric psychiatric unit. On a good day, Ranney said, 20% of pediatric emergency room beds at Hasbro Children’s Hospital are occupied by children experiencing mental health issues.

In hopes of adding pediatric capacity, the American Academy of Pediatrics joined the Children’s Hospital Association last month in calling on the White House to declare a national emergency due to child respiratory infections and provide additional resources to help cover the costs of care. The Biden administration has said that the flexibility hospital systems and providers have been given during the pandemic to sidestep certain staffing requirements also applies to RSV and flu.

Dr. Alex Kon, a pediatric critical care physician at Community Medical Center in Missoula, Montana, said providers there have made plans to care for older kids in the adult intensive care unit, and to divert ambulances to other facilities when necessary. With only three pediatric ICUs in the state, that means young patients may be flown as far as Seattle or Spokane, Washington, or Idaho.

Hollis Lillard took her 1-year-old son, Calder, to an Army hospital in Northern Virginia last month after he experienced several days of fever, coughing, and labored breathing. They spent seven anguished hours in the emergency room before the hospital found an open bed and transferred them by ambulance to Walter Reed National Military Medical Center in Maryland.

With proper therapy and instructions for home care, Calder’s virus was readily treatable: He recovered after he was given oxygen and treated with steroids, which fight inflammation, and albuterol, which counteracts bronchospasms. He was discharged the next day.

Although hospitalizations for RSV are falling, rates remain well above the norm for this time of year. And hospitals may not get much relief.

People can be infected with RSV more than once a year, and Krugman worries about a resurgence in the months to come. Because of the coronavirus, which competes with other viruses, “the usual seasonal pattern of viruses has gone out the window,” he said.

Like RSV, influenza arrived early this season. Both viruses usually peak around January. Three strains of flu are circulating and have caused an estimated 8.7 million illnesses, 78,000 hospitalizations, and 4,500 deaths, according to the Centers for Disease Control and Prevention.

Krugman doubts the health care industry will learn any quick lessons from the current crisis.

“Unless there is a radical change in how we pay for pediatric hospital care,” Krugman said, “the bed shortage is only going to get worse.”

KHN (Kaiser Health News) is a national newsroom that produces in-depth journalism about health issues. Together with Policy Analysis and Polling, KHN is one of the three major operating programs at KFF (Kaiser Family Foundation). KFF is an endowed nonprofit organization providing information on health issues to the nation.

The post Hospital financial decision play a role in the critical shortage of pediatric beds during RSV appeared first on Daily Montanan.