The following is a press release from the Office of the Governor.

MONTANA – On Monday, Governor Steve Bullock, in his official capacity as Governor of Montana, filed a lawsuit to enjoin William Perry Pendley from continuing to exercise the authority of the Director of the Bureau of Land Management (BLM) in violation of the Federal Vacancies Reform Act and the U.S. Constitution.

“I’m taking this action today not just to block William Perry Pendley’s further illegitimate oversight of the Bureau, but also to ensure that this unconstitutional abuse of executive powers does not become commonplace under any administration in the future,” Governor Bullock said.

Federal law prohibits acting directors from serving while their nomination is pending. The lawsuit seeks to bar Pendley from illegally performing the duties of director until the Senate has confirmed his nomination. Pendley continues to perform the duties of the director in violation of federal law, even while his appointment is pending.

The Constitution requires that the President nominate and the Senate confirm heads of significant federal agencies—a process the Supreme Court has described as a “critical structural safeguard” of our democracy. In defiance of this constitutional tenet, BLM has been run by a series of acting directors for the entirety of the Trump Administration—most recently through the recurring Acting Appointment of William Perry Pendley for over one year.

Bullock also said he hopes for immediate action by the Senate to consider Pendley’s nomination with an up or down vote.

“Americans and Montanans deserve a Bureau of Land Management director who values the public’s role in managing our public lands,” Governor Bullock said. “During Pendley’s unlawful tenure, the BLM has interfered with Montana’s collaborative efforts and public access priorities. This decision-making by unconfirmed federal officials stands to create long-lasting and irreversible injury to our state’s lands, economy, and wildlife.” 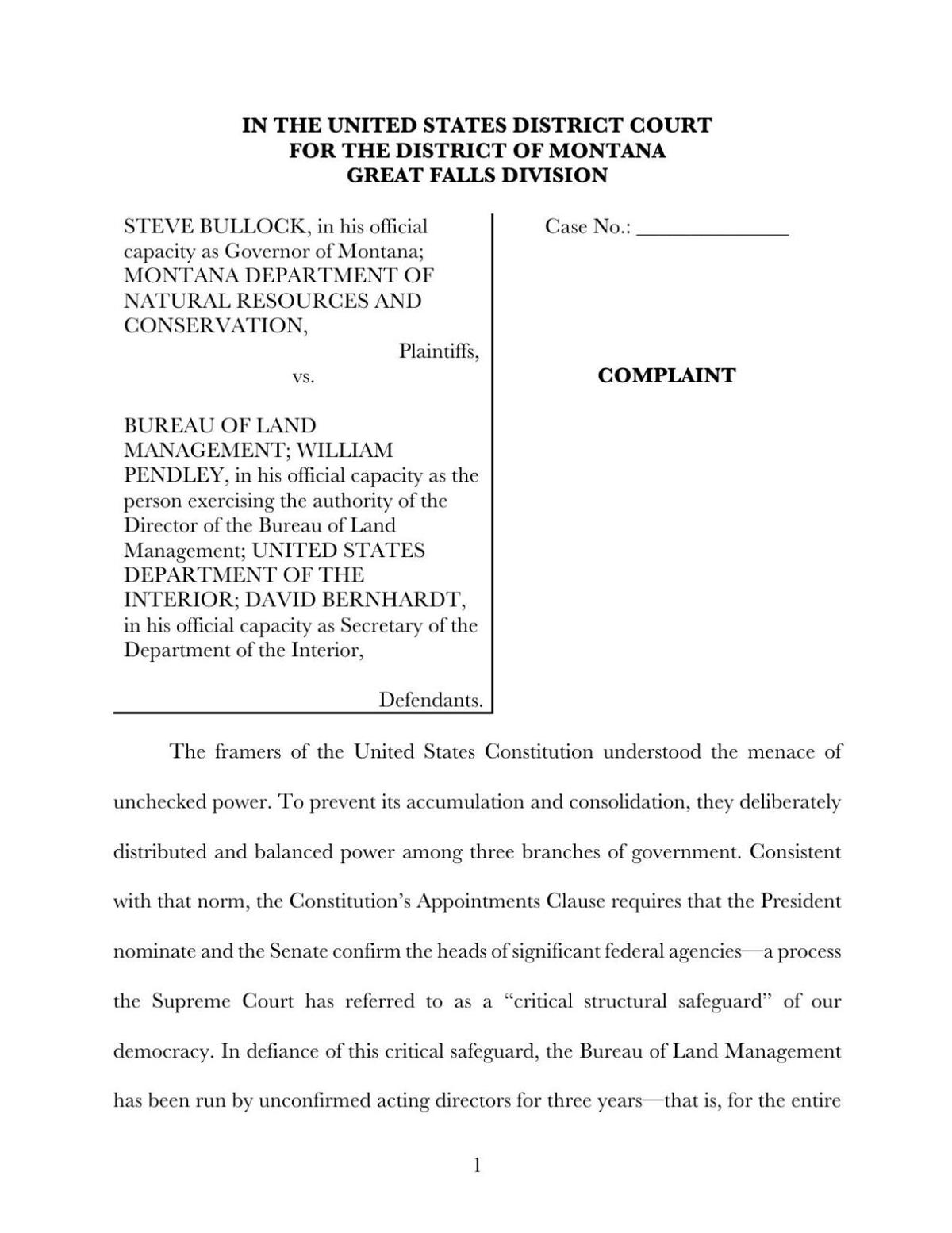 In Montana, BLM’s recent decisions have undermined its longstanding commitment to collaboration, threatening our outdoor heritage, and fostering uncertainty for industry and wildlife alike. Notably, BLM violated the law when it abandoned a bipartisan agreement with Western governors that prioritizes oil and gas leasing outside of sage grouse habitat. Allowing leasing in sage grouse habitat significantly risks Montana’s economic wellbeing, as it increases the likelihood of a federal listing under the Endangered Species Act. BLM continues to violate federal law and their own requirements to consider the protection of areas that have special fish and wildlife, archaeological, and primitive recreational values in their Resource Management Plans, which will guide land management for the coming decades.