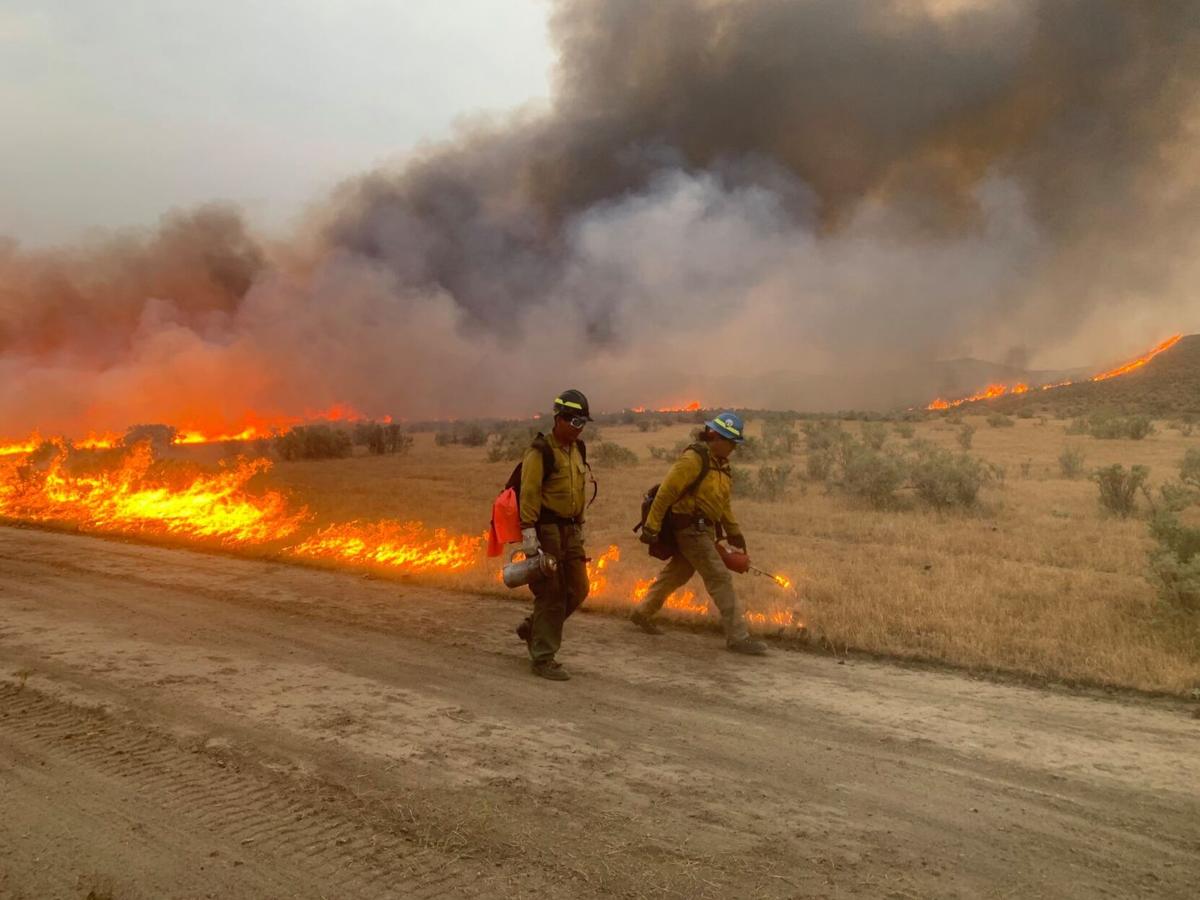 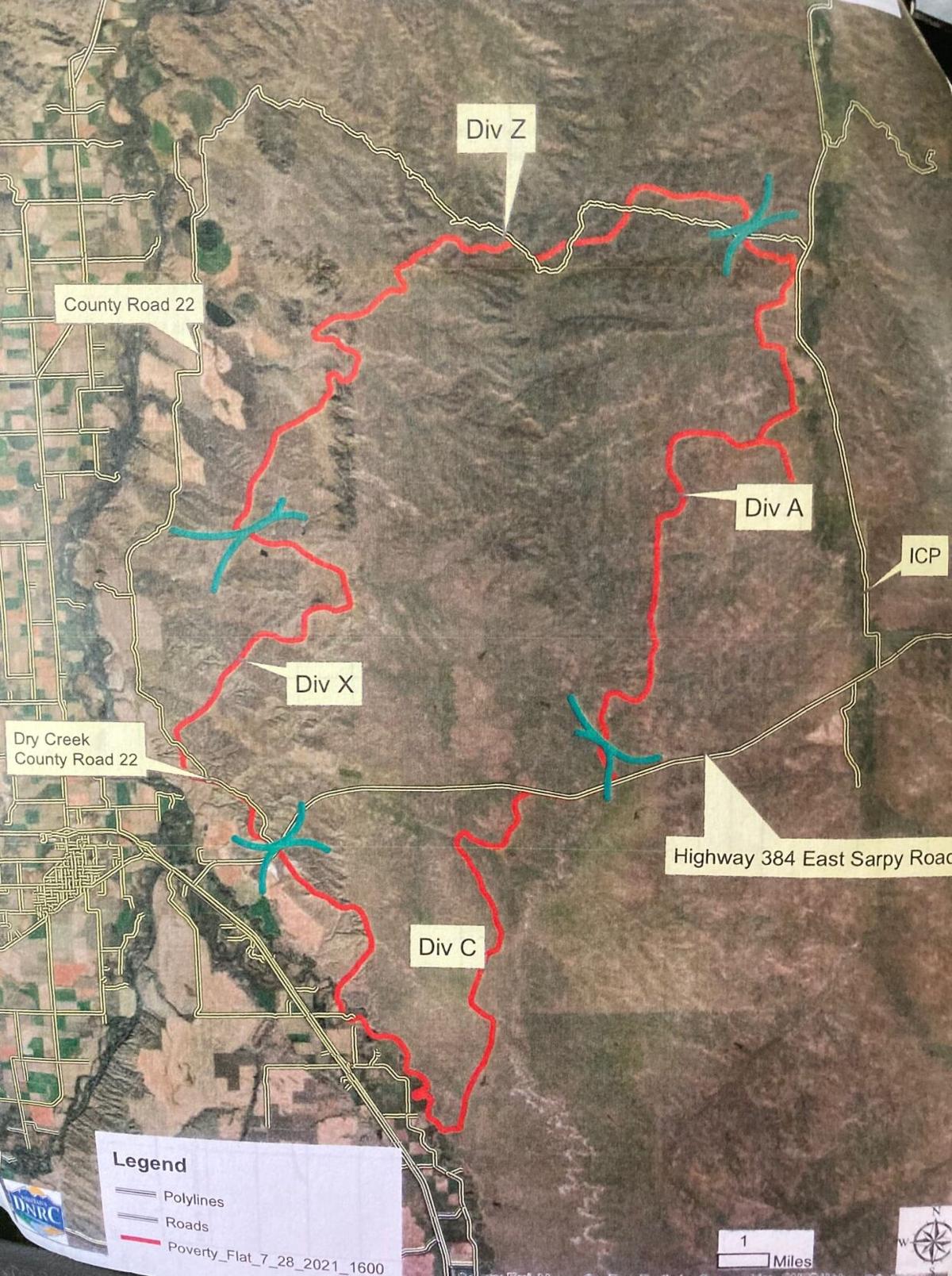 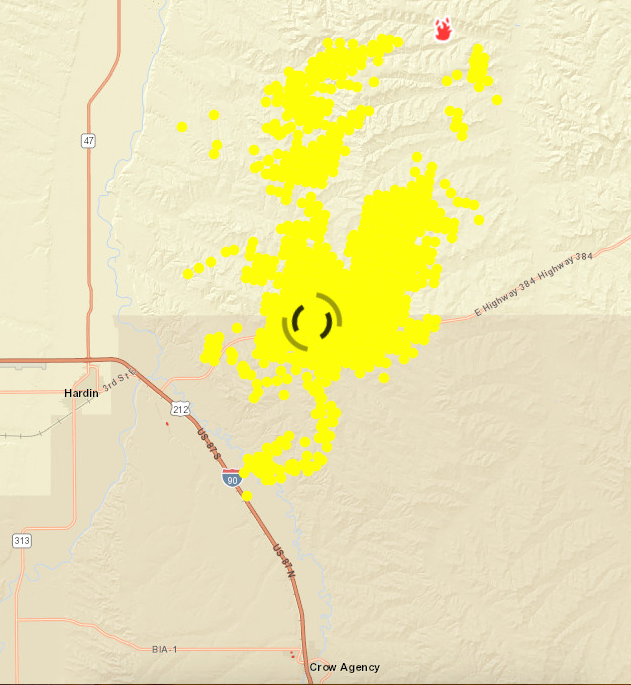 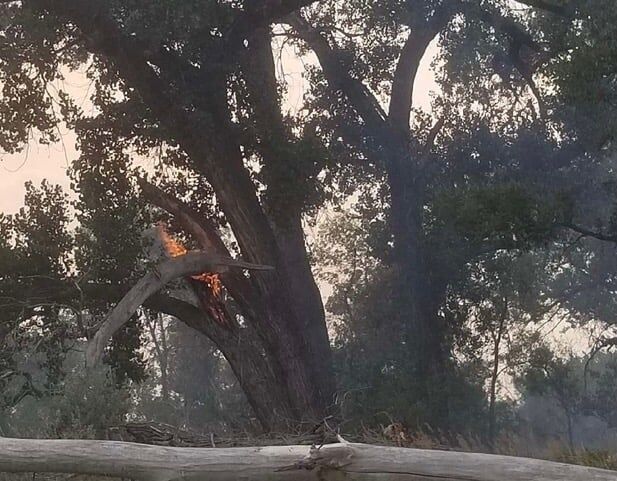 The County Assist Team (CAT) said in a release crews are reinforcing the fire line and still mopping up Tuesday. They are able to oversee risk by detecting and mapping more coal seams and snags.

Crews are patrolling the east side of the fire and started rehabilitation efforts.

Gusting ash that has the appearance of smoke may be visible.

The fire is substantially contained and CAT will hand over fire management to Big Horn County and Crow Agency Wednesday.

The Poverty Flats Fire has not seen significant growth since Saturday, and is currently sized at about 67,000 acres with 60 percent containment Monday.

The mild growth the fire has experienced since Saturday is due to improved mapping, according to a release from the County Assist Team (CAT).

CAT said crews will reinforce the fire line and mop up Monday. They will work along the river bottoms to make sure there are no more hot spots and dangerous trees are cleared. Crews will monitor and rehabilitate on the east side areas to prevent erosion and weeds.

Utility crews are fixing burned power lines, and CAT said there is a possibility of more truck traffic on Dry Creek Road.

Gusts of ash that resembles smoke may be visible, particularly in the afternoon, CAT said. 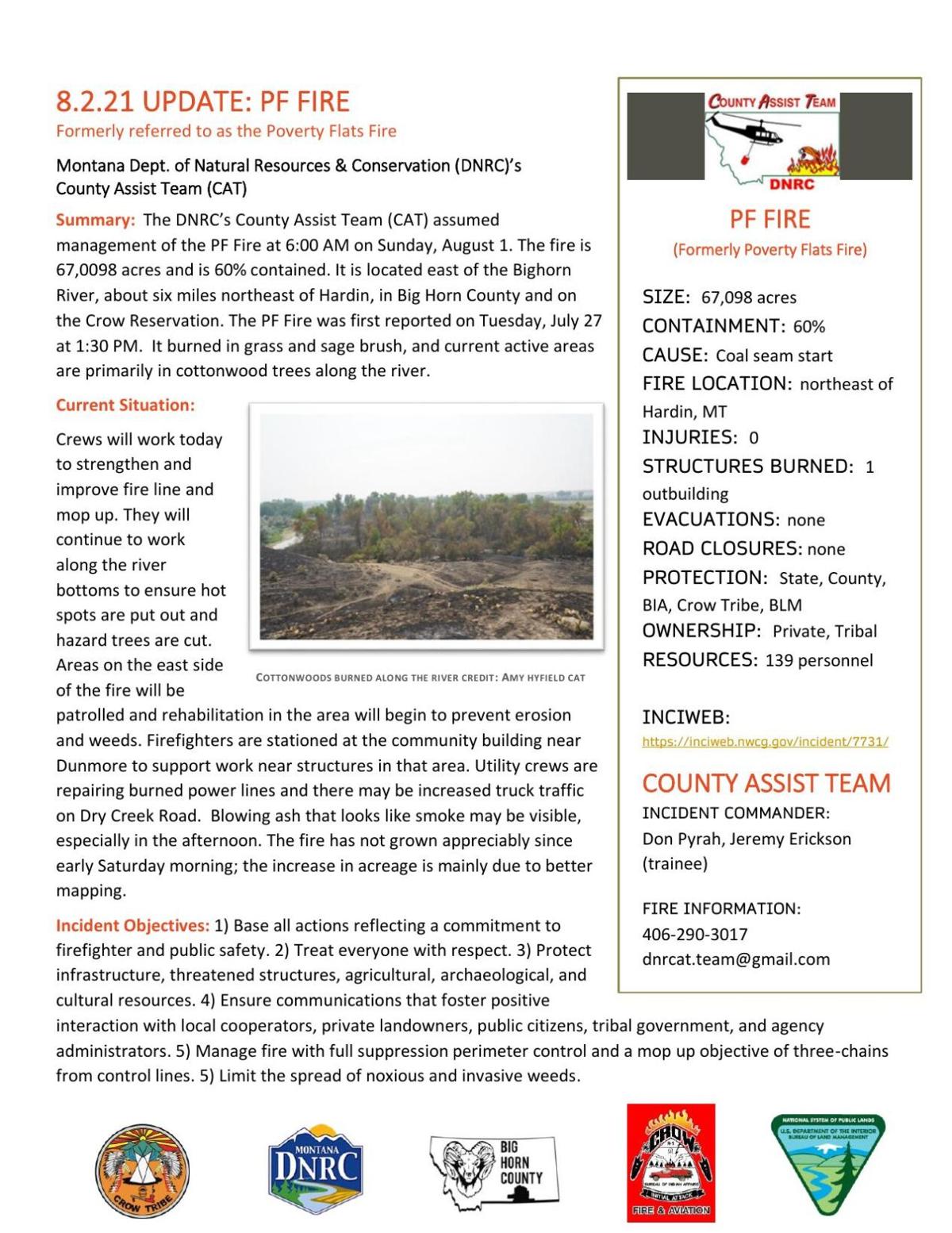 A meeting will be held Monday, Aug. 2 for the PF Fire, previously referred to as the Poverty Flats Fire, starting at 10:00 am in the basement of the Big Horn County Courthouse.

The meeting will be held to provide people an incident update and for fire officials to receive input from local cooperators, impacted landowners, tribal government, utility companies, agency administrators and other stakeholders involved.

Crews working the section of the fire on the Crow Reservation helped to save a home near Sarpy Road Thursday when 30-foot flames jumped grader lines, Task Force Leader trainee Garret Costa said.
Wednesday evening, the Crow squad and helitack and visiting engines completed burning out along the fireline from the Little Bighorn River just south of Dunmore eastward to Sarpy Road. As the crew burned grass between fireline and the fire edge, the helicopter caught “slopovers” where the fire tried to grow across firelines, and a Padlock Ranch grader built line around those slopovers.
Thursday, three engines checked on all hot spots. Bucket work by the Crow helicopter east of the river helped to cool areas, although some fire was still burning in a few cottonwood trees Thursday evening. There were “candlesticks still kicking flame out” at 7:30 p.m., Costa said.
Three engines will remain by homes at Dunmore overnight to reassure residents.
Friday’s plans include crews using portable pumps to begin to mop up remaining hot spots along the river.
The Crow Tribe has proclaimed Stage II fire restrictions that prohibit most open flame including campfires and fireworks, most driving off-road and smoking outdoors unless in an area cleared of burnable materials.

The BIA Forestry & Wildland Fire Management Crow Agency said in a Facebook post fire activity died down by Dunmore around 1 a.m. Thursday but will continue in the heat during the day.

BIA said helicopters helped reduce the spread of the fire with bucket drops Wednesday evening moistening cottonwood limbs high in the trees by the river.

The public is asked to keep away from the River Road and Dunmore to give firefighters enough space to work.

There are no evacuations in place at this time, but there is a temporary shelter set up at the Tribal Multipurpose Building in Crow and about 20 people were relocated there.

FEMA approved Fire Management Assistance Grant (FMAG) which will reimburse up to 75-percent of the state's firefighting spending in federal funds for the Poverty Flats Fire.

HARDIN, Mont. - Smoke, flames and helicopters were in the sky as the Hardin area became a war zone Wednesday night.

West Wind Fire: How you can help