Skip to main content
You are the owner of this article.
Edit Article Add New Article
You have permission to edit this article.
Edit
Welcome, Guest
Home
News
Weather
Nonstop News
Elections
SWX Sports
Wake Up Montana
Podcasts
Features
Connections
Report It
Promotions & Contests
Best of Montana
Community Calendar
What's on TV
About Us
1 of 2 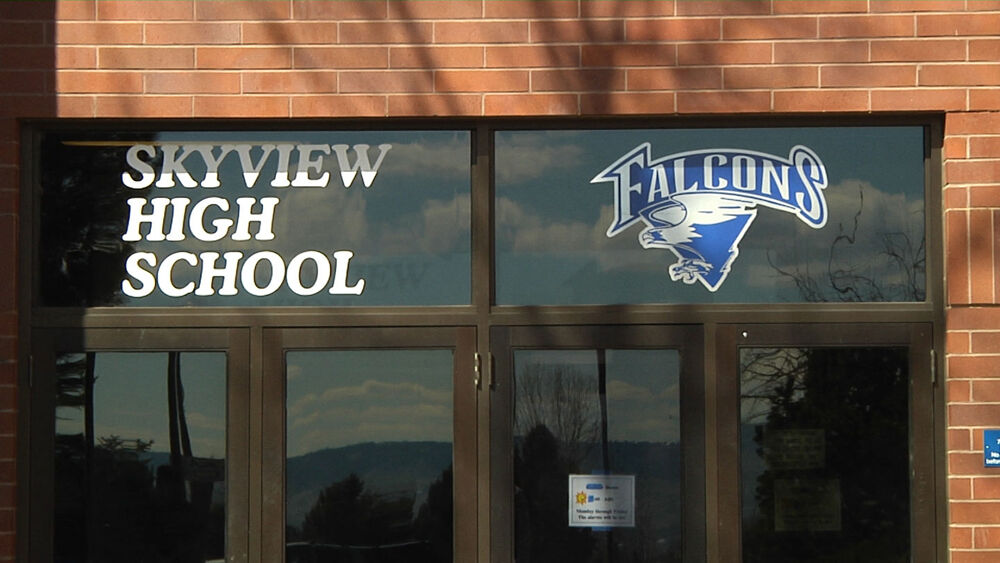 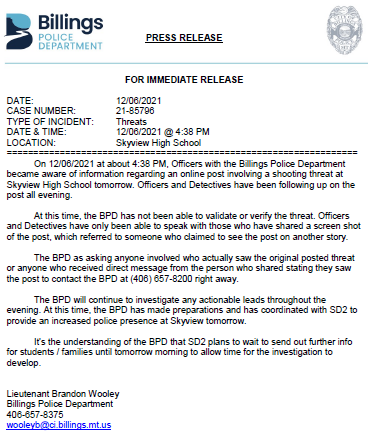 Parents and Guardians of Skyview Students:
We want to inform you that the Billings Police Department and their Internet Crimes Division are continuing to investigate yesterday's SnapChat threat. Based on the ongoing investigation, they believe the threat is not credible. If you or your student have any information, please contact the BPD at 406-657-8200. School will continue to operate under normal building safety protocols, with additional police support on campus.

School will be held as usual per Billings Public Schools.

Billings Public Schools posted the following on their Facebook page:

Parents,
Monday, late afternoon, we received information about a potential threat made on social media, targeting Billings Skyview High School. In collaboration with BPS administration, the Billings Police Department immediately conducted an investigation and has determined there is no credible threat at this time. As an additional safety precaution, there will be an increased police presence at Skyview High School tomorrow. All schools in Billings Public Schools will be open with normal operating safety procedures.

The BPD is asking anyone who saw the original posted threat or who received a direct message from the person who shared stating they saw the post to contact authorities immediately.

In a release, BPD says they have not been able to validate or verify the threat at this time. They say they've only been able to talk with those who shared a screenshot of a post referring to someone who claimed to see the threat on another social media story.

An investigation will continue throughout Monday evening.

To the BPD's understanding, School District 2 will wait to send further information for students and families until Tuesday morning.

The Billings Police Department tells us they are taking this threat seriously and will be on Skyview's grounds Tuesday, Dec. 7, as a precaution.

An investigation is underway.

We are waiting to hear more from local police and will update you with information as soon as it becomes available.